With miles of shoreline extending from Kentucky Lake (and on into the Tennessee River) and Lake Barkley (extending to the Cumberland River) this area of Western TN boasts miles of navigable lakes and streams. Cradled in the heart of Tennessee's beauty, this area is known for its rugged scenery with wooded rolling hills, streams and rock creek beds. Spend a leisurely afternoon driving through the backroads. You may spot one of the many iron furnaces from days gone by. Using the natural resources available in the area, large furnaces were constructed in the 1840s and 50s. Workers, sometimes as many as 200 workers for one furnace, lived in communities that grew around the furnace location and produced a type of ore called "pig iron." The ore was easily shipped to factories using the region's rivers.

Henry County draws tourists and residents alike, most of them coming to enjoy Kentucky Lake at one of its widest points near Paris Landing State Park. Henry County's first tourist attraction, Sulphur Well, was created by accident in 1821, when an artesian well of sulphur water was struck in an attempt to locate a large salt bed on a former Chickasaw reservation. Before being covered by Kentucky Lake, Sulphur well was a summer resort frequented by those seeking what they believed to be health benefits of drinking and bathing in the sulphur water, particularly during the 1837 yellow fever epidemic. After the creation of Paris Landing State Park in 1945, the lake soon became a popular recreation destination. Paris took on the designation as the “Capital City of Kentucky Lake,” and tourism became a leading factor in the area’s economy. If you have never been to Paris to see the Eiffel tower, your chance comes without crossing the pond as Paris, TN boasts a 1/16 size replica. You can also see big catfish on a pole or attend the World’s Biggest Fish Fry (approximately 12,500 pounds of catfish), held annually in the last full week in April. Henry County is also home to Paris Landing State Park and Henry County Medical Center.

Stewart County covers 458 square miles of land and 35 square miles of water. Home to the southern part of Lake Barkley and Land Between the Lakes, Stewart County includes the communities of Bumpus Mills, Cumberland City and Dover. Dover is home to the southern entrance to Land Between the Lakes, with the northern portion of the county actually in the Land Between the Lakes. Stewart County is home to one of the oldest national cemeteries at Fort Donelson National Battlefield, which also preserves Fort Donelson and Fort Heiman, two sites of the American Civil War. Kentucky was the most vulnerable area in the Confederate defensive line in the Western Theater and the Tennessee and Cumberland Rivers were potential avenues for a Union invasion through Kentucky and into Tennessee and beyond. Since Kentucky had declared itself neutral, Confederate defensive forts could not be built within the state, so engineers from the Confederate Tennessee Infantry worked to find a suitable location at Fort Donelson, just 12 miles over the state line in Tennessee. In 1867, Fort Donelson Cemetery was established as the final resting place for Union soldiers and sailors initially buried in the Fort Donelson area. 512 of the Civil War soldiers buried there are unknown soldiers, originally buried in local cemeteries, hospital cemeteries and in nearby towns. Today the national cemetery contains both Civil War veterans and veterans who have served the United States since that time.

Benton County has a variety of recreation and tourist areas including Kentucky Lake, the Patsy Cline Memorial and two state parks. The Chickasaw Indians were the first to claim future Benton County for themselves, primarily using it as a hunting range. After the Jackson Purchase, settlers from Virginia, the Carolinas and other eastern states promptly arrived. Today, the area is still known as a hunting range - but for ducks. There are two units of the Tennessee National Wildlife Refuge within Benton County. Camden, the county seat of Benton County, is a bustling small town on the shores of Kentucky Lake. In Benton County, business, industry, tourism and agriculture help form a well balanced economy. The surrounding countryside is dotted with pastures of grazing animals and fertile farms. Benton county has a population of about 16,000 people and 8,000 cattle.

Houston County has one of two ferries operating in the state of Tennessee. Instead of a 90-minute drive, you can take a seven minute ferry ride across the Tennessee River from Houston to Benton County. Houston County is also home to nine century farms, a Tennessee program designed to honor families that have held and farmed the same piece of land for at least 100 years, earning at least $1000 in annual income from the farm yearly. In honor of its Irish heritage, Houston county, and the city of Erin, is home to one of the top ten Irish festivals in the United States, and the biggest one west of Chicago. Held annually on the third of March, the Irish festival offers a parade, demolition derby, live music, food and arts and crafts galore. 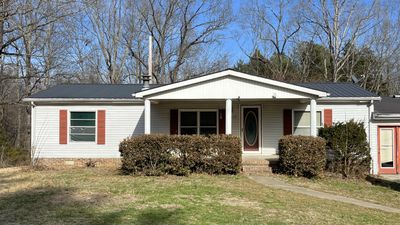